Prior to 2020 when the COVID-19 pandemic hit, Indonesia’s economy had shown relatively strong growth over the last couple years, averaging at around 5 percent year-on-year. Infrastructure investment is one high potential area Indonesia can further support growth and reduce inequality. Underinvestment in this sector has left the country with a large infrastructure gap that needs additional financing – as much as 3-4% of GDP in capital investments.

While the central government aims to increase the target of their average capital budget expenditure contribution to 1.7-2.3% of GDP each year throughout FY 2020-24, two key constraints remain. First, limited fiscal space constrains the allocation of sufficient funds. Second, public financial management challenges may prevent more efficient capital budget execution. While the former may reflect the government’s ability to perform its income-generating power through available revenue sources, the latter may showcase technical challenges in the government bodies that can be addressed if we understand the underlying issues. 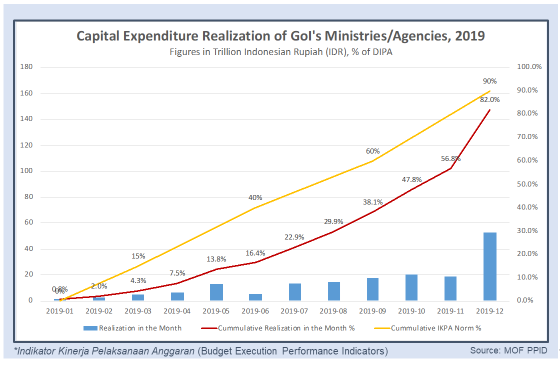 Using survey responses from across spending units in Indonesia, as well as field visits and econometric analysis, the study found that the slow pace and low level of capital budget execution performance is caused by interrelated factors that can be grouped into five main areas.

First, fragmentation of preparation of capital expenditure (CapEx) proposals and frequent rotation of the heads of spending units, negatively impact execution. Adopting an 80/20 rule where preparation of CapEx proposals can be consolidated by selected large spending units and streamlining the number of their spending units within ministries can help improve the former. As limited time for the heads of projects means less incentive to finish the project in time, a minimum tenure of at least two years would provide predictability. 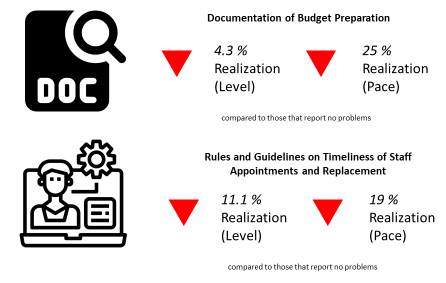 Second, issues in budgeting processes such as limited time to prepare proposals, gaps between bottom-up proposals and top-down allocation, frequent budget revisions, weak linkages between planning and budgeting, and issuing regulations later in the cycle, all adversely affect the budget process (Figure 2). The extent to how much these factors weigh in varies, but ensuring the law is clearer on who is responsible and accountable for managing a program and improving the flow of information between units would improve these aspects. 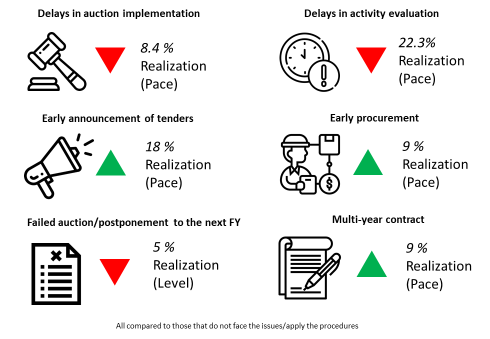 Third, procurement processes, especially delays in such processes, play a significant role in affecting budget execution . For instance, announcing tenders early can help improve the speed of which it goes through by 18 percentage points, compared to those that do not announce early. Other factors include lack of qualified staff to evaluate bidders’ proposals, regulation allowing early procurement processes and multiyear contracts. (Figure 3). Early tender announcements, the use of multi-year contracts, systematic monitoring and enhancing competitiveness in the bidder selection and prices are few recommendations. 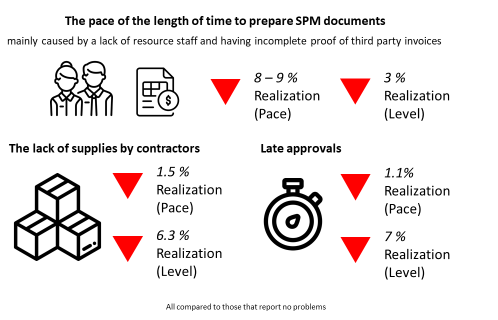 Fourth, budget implementation processes are also crucial. CapEx budget disbursements are skewed at the end of the fiscal year because of delays in getting the project implemented and processing contractors’ invoices. These negatively impact both the capital budget spending’s levels and pace. Lack of transparency and accountability and limited staff capacity to process payment claims also lead to delays (Figure 4). Among others, contracts should be required to include an “indicative” time for submission of invoices and facilitating the use of  an electronic submission.

Finally, financial management and having user friendly financial applications are also important. These include some external factors such as delays from contractors.

All these factors have caused preventable delays in planning, budgeting, and decision-making activities and the results have clear policy implications.

The findings of the study, included in the full report which was worked jointly with the government, were presented to Indonesia Ministry of Finance (MoF) and received positive feedback. MoF believed that the recommendations that the Bank have presented in this study were practical and should be followed up internally within the government. To address challenges of the identified constraints and in line with the recommendations, the government has taken some follow-up measures which include:

There is still room for improvements. But the steps that have been taken along with the high-level of attention provide opportunities to undertake broader improvements to accelerate budget execution.