The Public Expenditure and Financial Accountability (PEFA) Program released its first Global Report on Public Financial Management through a series of launch events (in three languages – see below) in February, 2021. This blog shares key findings from the Report and views from the international experts who attended the launch.

The Global Report highlights that progress on PFM reforms is uneven:

Participants in the launch events noted the value in using PEFA data to inform the global agenda on public finances. The PEFA framework has made significant progress over the last 20 years, both in assessing the progress of countries’ PFM systems and supporting structured reform processes . The framework is the most widely used PFM diagnostic tool and a starting point for setting reform priorities in countries across the world. Nevertheless, participants noted that PFM systems are broadly recognized as difficult to change, and countries have widely differing capacities for reform. Some important questions remain about how best to achieve concrete and lasting progress.

Accountability remains the focus of PFM during COVID-19

The COVID-19 pandemic has destabilized the global economy and shown the importance of strong and effective governance institutions . It has put PFM systems under enormous stress. Reallocating budgets to health sectors and launching ambitious recovery plans can pose significant PFM challenges. Participants underscored that spending without accountability and oversight, or without some basic checks and balances, is likely to be bad expenditure. A balance needs to be found between speed in delivering emergency services or implementing recovery plans and accountability for their delivery (“keeping the receipts”). The pandemic has demonstrated how transparency and public participation in decision-making are critical elements for effective government interventions.

Delivering results at the sector level

Participants noted that budget execution in sectors such as health is often seen as a black box. More research is needed to explain why budgets are often not executed as intended. Sound PFM is considered crucial for effective public service delivery. But it has proven difficult to demonstrate that PFM reforms by themselves can drive improvements in public services partly because reform is a highly complex process. The quality of governmental institutions and public sector management also matter.

Reform prioritization has become even more important today as resources are scarce and impacted by COVID-19. Building strong PFM foundations means having the requisite human, technological, and financial resources for good management of public finances. In India, for example, PFM reform has involved a mix of institutional reforms and leveraging technology to build strong PFM capacity at both the central and state level. Even if the results are initially mixed, maintaining a spirit of reform should eventually pay off, not only in terms of value for money from public spending, but also by expanding the margins of maneuver that are open to a country in terms of its public policy choices.

Details about the events in English, French and Spanish may be accessed on the PEFA Website: 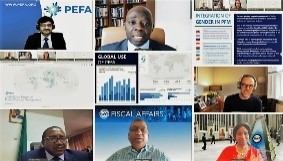 For questions and further information contact the PEFA Secretariat at: services@pefa.org

[1] Authors are staff of the PEFA Secretariat, Washington DC.

Note: The posts on the IMF PFM Blog should not be reported as representing the views of the IMF. The views expressed are those of the authors and do not necessarily represent those of the IMF or IMF policy.

This blog was originally published on the IMF Public Financial Management Blog.